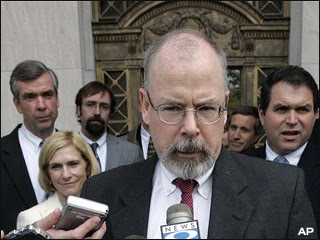 "Doing the right thing" is the universal wrench of politics and governance. This is because what constitutes the right thing has more to do with how a pol or public official adjusts the wrench to fit their circumstances -- which is to say survive with arms and legs intact if not win points -- than the moral high ground.

That so noted, the news that Attorney General Michael Mukasey has appointed a outside prosecutor aka special counsel for the Justice Department's criminal investigation into the willful destruction of those CIA torture tapes is welcome. But we're so used to former AG Alberto Gonzalez doing the wrong thing with such consistency that I'm having to suspend belief that Mukasey is doing the right thing and not playing a role in a drama with an outcome pre-determined by the White House.

I apologize for my cynicism, but you have to admit that it is well earned. There have been many investigations, criminal and otherwise, of administration officials that have gone nowhere because they were tinged with politics, and the only Bush era precedent for the Mukasey appointment is naming Patrick Fitzgerald to be an independent prosecutor in the Wilsom-Plame leak investigation.

Durham's appointment is an indication that there is reason to believe that high-ranking CIA officers, and perhaps other administration officials, may have committed criminal acts in destroying in tapes of the 2002 interrogations of two Al Qaeda operatives despite explicit instructions that they be preserved.

The tapes were never provided to the courts or to the September 11 Commission, which had requested all CIA documents related to Al Qaeda prisoners, and the question of whether to destroy them was the subject of deliberations among lawyers at the highest levels of the Bush administration. These lawyers included Gonzalez when he was White House counsel; Harriet Miers, his successor as counsel, and David S. Addington, who was then counsel to Vice President Cheney.

Congressional Democrats had asked Mukasey to appoint an independent prosecutor as Fitzgerald had been, but he refused and Durham's powers as an outside counsel/special prosecutor will not be as broad.

Fitzgerald's investigation led to the prosecution of Lewis "Scooter" Libby, Cheney's former chief of staff, on perjury and obstruction of justice charges. President Bush commuted Libby's sentence after he was convicted.

More here.
Posted by Shaun Mullen at 7:21 AM
Email ThisBlogThis!Share to TwitterShare to FacebookShare to Pinterest