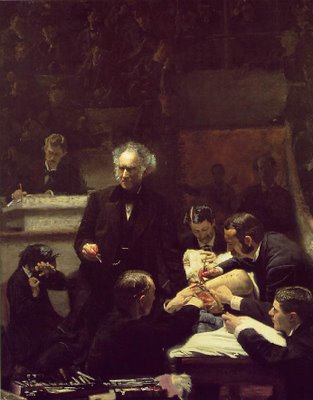 Beginning at 4 this afternoon, visitors to the Philadelphia Museum of Art will be able to see something that only a couple of months ago seemed impossible -- "The Gross Clinic," one of the great American masterpieces of realism -- that was about to be snatched from the city where it was painted and has been on display for 128 years.

The Thomas Eakins painting had been owned by Jefferson University, a medical school and teaching hospital, since 1878 when it was donated by alumni. It has hung in a dark corner of a lobby at the university, which is not exactly a tourist attraction.

Jefferson, blithely unaware of the intrinsic value of the canvas, announced in November that it was selling it for $68 million to a Wal-Mart heiress, who planned to exhibit it at a new museum in Bentonville, Arkansas, and at a Dallas Museum.

Local institutions were given 45 days to meet the offer -- and did after a dramatic fundraising drive.

At the center of "The Gross Clinic," a very large work at 96 by 78 inches, is Dr. Samuel Gross, who is presiding over an operation to remove part of a diseased bone from a patient's thigh. Gross is lecturing in a Jefferson amphitheater crowded with students, as well as the patient's mother and Eakins himself.

Public reaction to the painting when it was unveiled was horror because of the surgical incision and all the blood.

The painting is to be shared between the Philadelphia Museum of Art and the Pennsylvania Academy of Art, where Eakins taught for years before being forced to quit in 1886 because he removed the loincloth of a male model in a class where female students were present.

The fundraising effort was not without controversy.

Why cough up $68 million for a work of art when Philadelphia is cash-starved and has so many pressing problems?

Because of the painting’s intrinsic value to each and every resident of a city that is nothing if not an historic and cultural treasure trove, not to mention all of the tourists who will spend money to see "The Gross Clinic" now that it will be in truly public spaces.

More here.
Posted by Shaun Mullen at 5:17 AM
Email ThisBlogThis!Share to TwitterShare to FacebookShare to Pinterest