A New Jersey State of Mind 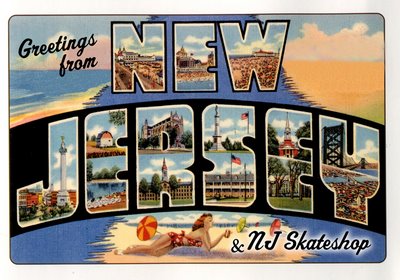 New Jersey joined the fledgling American union early on, unanimously ratifying the Constitution a few days after Delaware and then Pennsylvania. That may well be the last time over the intervening two-plus centuries that there has been unanimity about anything to do with New Jersey. Except for widespread agreement that it is the weirdest of states.

New Jersey, you see, has a profoundly historic identity crisis that borders on schizophrenia. Situated smack dab between New York City and Philadelphia, New Jersey exhibits traits of both cities and their cultures. But the rich Bruce Springsteen songbook notwithstanding, it has no statewide culture of its own to speak of. Worse yet, with the exception of a modest homegrown public television network, its citizens must rely on TV broadcasts from other places where identity and culture run deeper.

Singer-songwriter John Gorka nicely sums up this peculiar mindset in the closing lines of “I’m From New Jersey,” which is properly sung with a mournful languidness that borders on narcolepsy.

I’m from New Jersey. It's not like Texas.
There is no mystery, I can't pretend.
I'm from New Jersey, it's like Ohio,
But even more so. Imagine that.
I know which exit, and where I'm bound,
Tolls on the Parkway they will slow you down.
New Jersey people, they will surprise you,
Cause they're not expected to do too much.
They will try harder, they may go further,
They never think that they are good enough.
I'm from New Jersey, I don't expect too much.
If the world ended today I would adjust.

Can’t you just feel the pain?

New Jersey’s license plates were long adorned with “The Garden State” slogan because of the state's many small truck farms, which grew the most delicious tomatos anywhere, including the succulently flavorful and disease resistant Rutgers. If you wanted the best for that pasta sauce, salad or sandwich, you asked for “New Jersey tomatos, please.”

You can still find the occasional basket of locally grown tomatos at a roadside vegetable stand, but most of the truck farms have been plowed under for the state’s current bumper crop – suburban sprawl.

Suburban sprawl is the unplanned and uncontrolled spread of development from cities to practically everywhere else. Only developers and construction companies (and politicians on the take) want sprawl, but nobody seems to be able to stop it. So it’s not for nothing (pronounced nuttin by gen-u-wine old-time residents) that New Jersey is the most densely populated of the 50 states.

Speakin of nuttin, the state may lack an identity, but not a vernacular all its own:

A shoobie is a tourist, any carbonated beverage is a coke, everything is measured by blocks, to hook up is to have sex, route is a term never heard (it’s always take “9,” not “Route 9”), a pie is a pizza, the beach is the shore, to travel there is to go down the shore, and a sub is a sandwich made with various meats, cheeses, vegetables and (alas) out-of-state tomatos.

That brings up another big image problem.

New Jersey is the only state without an epynonymous university of consequence. The sports teams (and more rarely the academic prowess) of Pennsylvania State University, University of Washington, Kansas State, Ole Miss, and so on and so forth, are magnets for state pride, bragging rights, paraphernalia from baseball caps to t-shirts to beer mugs, as well as lots of college sports betting, most of it illegal.

When was the last time you heard someone say, “We’re from Rutgers and we’re going to beat your ass!”

Even the most cursory Internet search reveals that virtually everything written about New Jersey has to do with official corruption.

In fact, New Jersey is the second most corrupt state in the union after Louisiana (no surprise there), according to political scientist Larry Sabato, who co-authored an entire book about New Jersey’s love affair with the bribe.

This often falls under the heading of “Pay to Play,” shorthand for an undeniable fact of New Jersey life: If you want to do business with the government at any level, you have to grease politicians' palms, usually in the form of campaign contributions.

The list of the dozens of politicians who have succumbed to the siren song of corruption in recent years is at least a reflection of New Jersey’s diversity.

* Milton Milan (Hispanic-American), the former mayor of Camden, a South Jersey city consistently ranked as the most dangerous in America, who was convicted of soliciting bribes from mobsters and staging a fake burglary.

* Robert W. Lee Sr. (African-American), the ex-chief of the state boxing commission who was KO’d for racketeering, money laundering and tax evasion.

* Matthew Scannapieco (Italian-American), the ex-mayor of the sleepy burg of Marlboro who accepted $245,000 in bribes from builders to allow them to literally reshape the landscape of his fast-growing town without having to abide by inconvenient zoning laws that were a check on sprawl.

* Paul J. Byrne (Irish-American), the former Hudson County power broker and admitted bribe bagman who wanted to be remembered “as a stand-up guy and not a rat” before suffering a massive heart attack prior to sentencing.

The reason that smash-and-grab politics is so widespread is simple. There is an enormous hole in the New Jersey power structure between the top -- a governor with enormous clout -- and the welter of county, township and municipal governments at the bottom. There simply is nothing in between.

When Jon Corzine was sworn in as governor back in January, the keynote of his inaugural address was a pledge to enact sweeping ethics reform. If that sounded familiar to jaded New Jerseyans, it’s because predecessors since time immemorial had said the same thing.

Corzine's honeymoon as governor has been the shortest in memory.

He recently took a well-deserved beating for stoopidly suggesting that one way to deal with spiking gasoline prices would be to allow motorists to pump their own gas. New Jersey, you see, is one of only two states without self-service gas stations. This fact notwithstanding, it also has pretty much the lowest gas prices in the region, so the guv's suggestion that thousands of gas station workers be laid off to pare a few pennies off the price of regular unleaded went over about as well as another radiation scare from one of the state's notoriously unreliable nuclear power plants.

By the way, Corzine replaced Acting Gov. Richard Codey, who had become governor after the sudden resignation of James McGreevey in 2004 because of an extramarital affair with a male aide whom he had appointed head of the state’s department of homeland security despite not having a lick of experience.

The rot is not confined to politics.

Most people see New Jersey through a car windshield on the infamous New Jersey Turnpike. That makes the jackbooted State Police troopers who patrol that toll road good will ambassadors of a sort. What sort? The sort that will stop you because of your skin color.

Meanwhile, the University of Medicine and Dentistry of New Jersey (UMDNJ), the state’s premier health-care institution, has become the first university to be overseen by a federal monitor because of a scheme through which state and federal governments were bilked out of nearly $5 million in improper Medicaid payments. It also was revealed that the politically wired university administration had let an astonishing $700 million in no-bid contracts and hired new employees based not on their qualifications but a secret code identifying their political patron -- if they were connected enough to have one.

In a rare fit of self reflection, New Jersey changed its slogan from “The Garden State” to “Come See For Yourself” in January.

You don’t have to be a UMDNJ brain surgeon to know it cost millions and millions to redo all those state line signs, official stationary and, of course, license plates at a time when there is a huge state budget deficit. But wait! It turns out that West Virginia used the very same phrase a while back, so as a New Jersey tourism official solemnly declared the other day, "We are proceeding without the slogan."

I've got an idea. How about “The Kick Me State.”
Posted by Shaun Mullen at 2:59 AM
Email ThisBlogThis!Share to TwitterShare to FacebookShare to Pinterest

In the spirit of my irrevent post, Dan "Blinq" Rubin suggests color coding Jersey Turnpike exits and gets the ball rolling in an email to me with these suggestions:

To which I add this suggestion for the Camden exit:

And this for beach resorts: